I recently had the pleasure of listening to Spencer Tillman, former NFL player, give a speech at a Rotary Club meeting last week. In just the first few minutes of his speech, I was inspired. 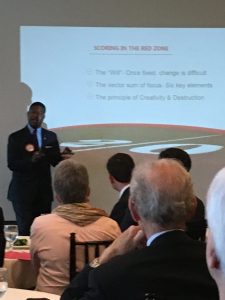 Tillman told the story of Izthak Perlman, a famous violinist who suffered from polio. At every concert, Perlman insists that the audience watch him walk on the stage with the assistance of two crutches and braces on his legs. Once he makes it up on stage, he sits down in his chair and undoes the clasps on his legs. Finally, he nods to the conductor. He is ready.

At one particular concert in New York City, Perlman went through his usual ritual and began to play. But just after the first few bars, SNAP! A string on his violin broke.

The audience looked around in horror, but Perlman simply closed his eyes, waited a moment, and signaled for the conductor to begin again.

To everyone’s dismay, Perlman recomposed the piece in his head, playing only with the strings he had left. And it was one of his most beautiful performances.

At the close of the concert, he quieted a roaring audience and said thoughtfully, “You know, sometimes it is the artist’s task to find out how much music you can still make with what you have left.

Perlman didn’t stop the concert. He didn’t ask for a new violin. He made the best with what he had. When we are faced with obstacles, we must make do with the tools we have instead of focusing on what we lack. Road blocks happen. During races, tests, and important meetings. The outcome depends on what we make of it. 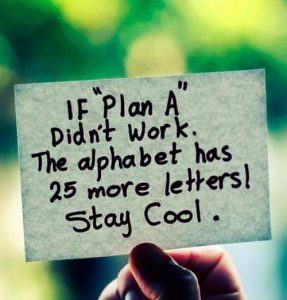