Figuring out where you want to spend the next four years of your life is a monumental decision. Deciding if you want to apply Early Decision or Early Action to one of your top picks can add an additional level of stress. If you’re unsure of your options– and trust me, they can be confusing– read on. Remember, not all universities offer Early Decision and Early Action, so you’ll also have to do a little bit of your own research. 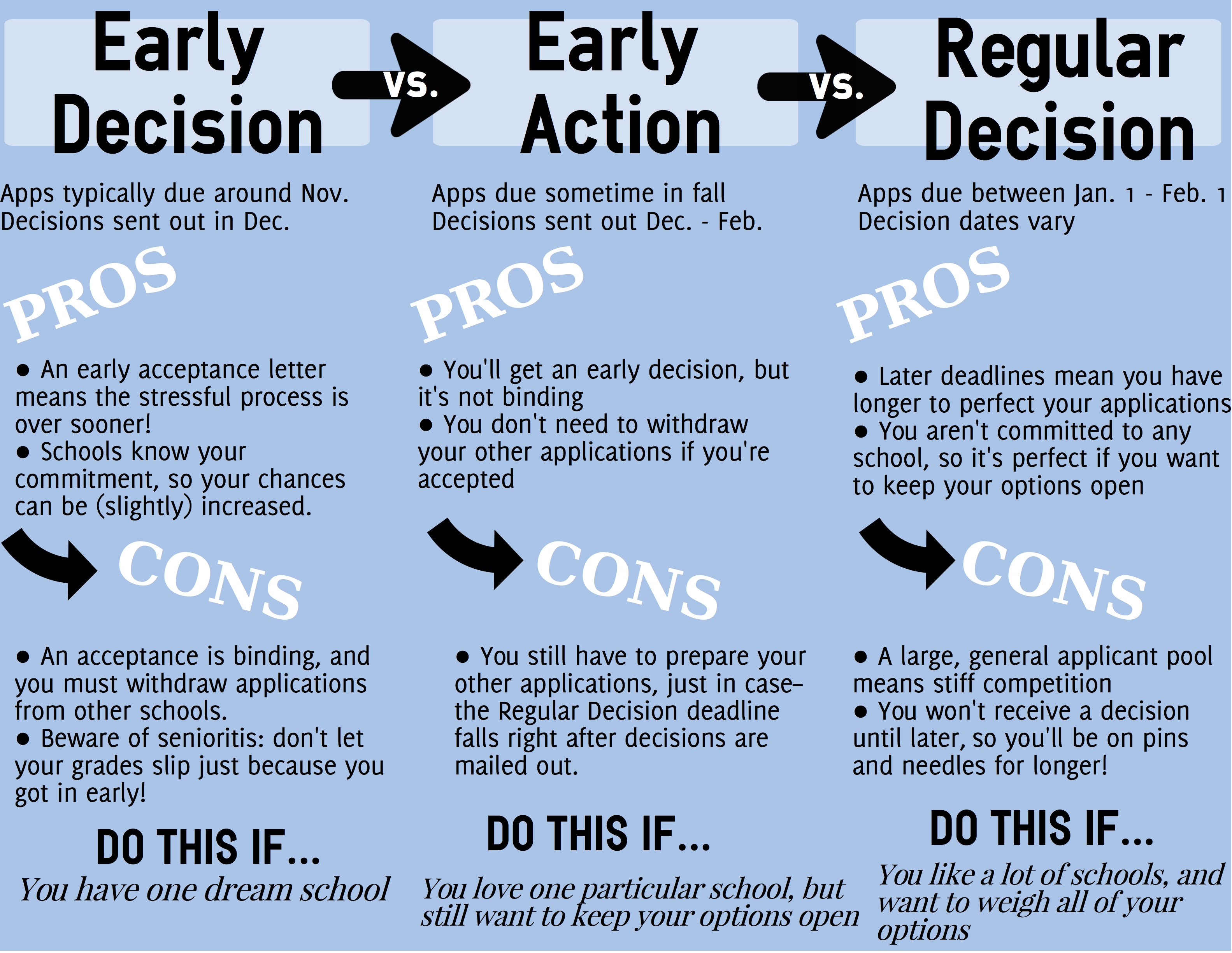 Applying Early Decision to a school means that your application is due earlier, you’ll get a decision back earlier, and if you are accepted, it is binding. You are required to withdraw other applications to every other school you’ve applied to if you’re accepted. By sending in an Early Decision application, you’re telling that school that they’re your absolute first choice.

I applied to my university Early Decision, so I’ll tell you a little bit about why. I only saw myself at one school. Whenever I had a big exam, I wore this school’s spirit wear for good luck. I told everyone and their mother that I wanted to attend. There was not a single school I wanted as badly. When I got accepted, I happily withdrew my other applications and I never had a shadow of a doubt where I belonged.

On the university’s end–the admissions committees care about their yield (the number of kids who accept offers of admission) because it helps their rankings. For them, ED applications are a sure bet. The school knows you’re committed to them, so that can give you a slight edge. Be aware that acceptance rates are typically only modestly increased when you apply ED. Check out this comprehensive list of acceptance rates.

It is also important to know that the applicant pool applying ED is usually the cream of the crop. They’ve got the grades and scores that the school is looking for. Applying ED is not a good choice for applicants that are on the cusp grades/scores-wise. (The admissions people will hedge their bets, thinking someone from the regular decision pool will have better stats and then likely not accept you.)

Bottom Line: Only apply Early Decision if your heart is with one school and one school only and you have the credentials.

Early Action is similar to Early Decision, but without the commitment. There is an earlier application deadline than Regular Decision and you’ll get your response earlier, but acceptances aren’t binding. This is a great choice for you if you really like one particular school, but you haven’t eliminated every other option quite yet.

Some schools do something called “single-choice early action” (SCEA), which means you’re only allowed to apply to their institution early. Again, it’s not binding, but you can’t send out early applications anywhere else.

Applying Early Decision or Early Action means you need to be on top of college applications and letters of recommendation because your applications are due much earlier than Regular Decision applications. (Honestly, even if you’re applying for regular decision, it is best to get those applications in as early as possible!)

If you choose to apply early, be aware that you need to have other applications prepared. If you unfortunately receive a rejection letter, you may only have two weeks or so until Regular Decision applications are due. Don’t bank on an acceptance letter and then have to scramble to get your back-up applications completed!

Finally, if you apply Early Decision or Early Action and get that beautiful acceptance letter in December, beware of senioritis. While knowing your fate early can be a beautiful thing, it can also cause some serious slacking. Keep your grades up, or your university can rescind their acceptance.