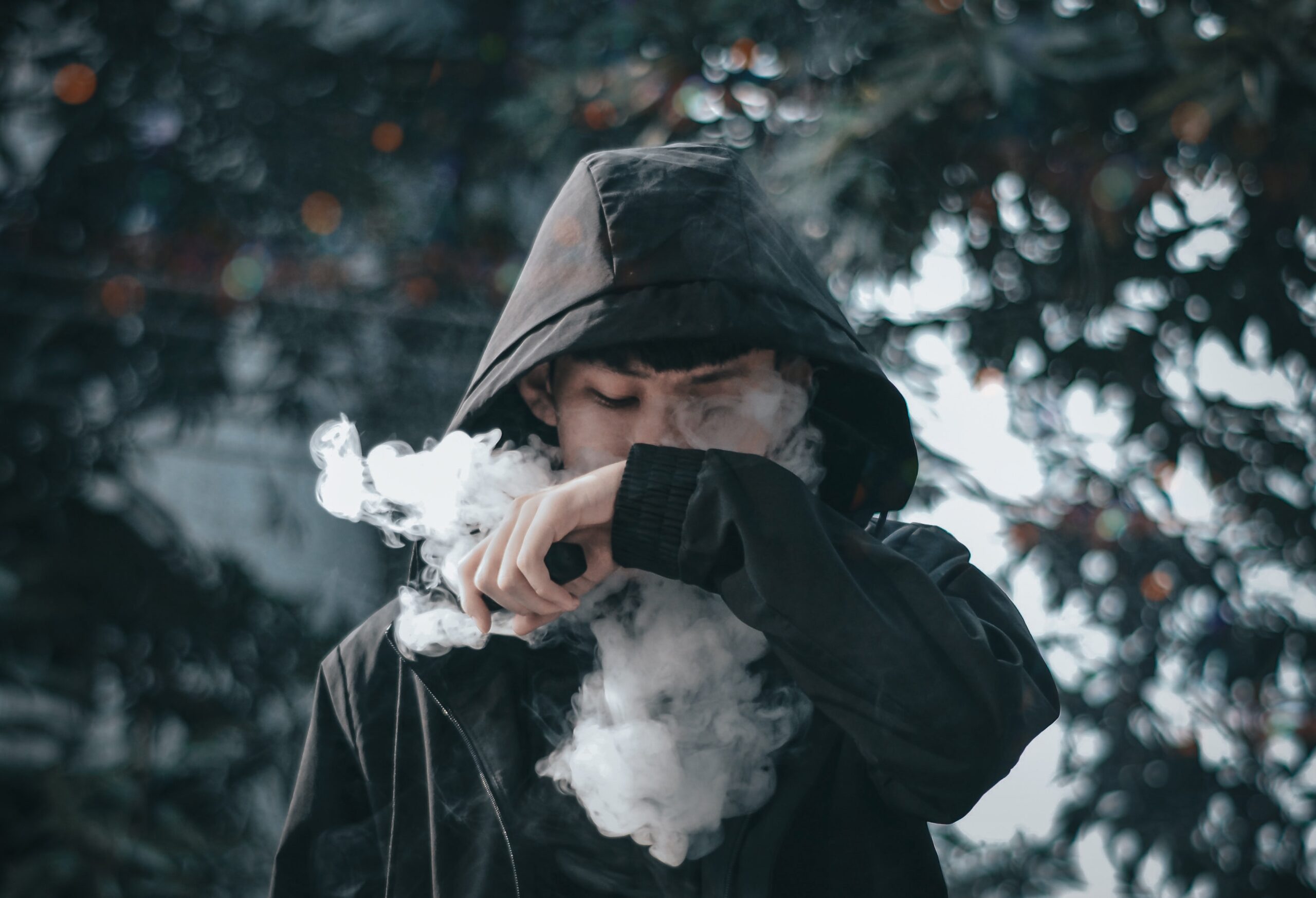 Vape use has exploded among high school and college students. According to a survey by the National Institute of Drug Abuse (NIDA), nearly 1 in 3 students in 12th grade report using a vaping device within the past year. Because vapes are small, easy to conceal, and don’t reek like typical cigarettes, they’re easy to use – nearly anywhere and everywhere. Plus, with flavors like blue raz, glazed donut, and cotton candy, they’re much more appealing than a normal cigarette. However, many of the students who reported vaping in the aforementioned survey by NIDA were unable to say what exactly was in the device they were using. So… what’s the catch? What’s the real deal with vaping?

When asked what was in their vapes, many teens responded, “just flavoring.” And really yummy flavors, at that.

Unfortunately, vaping isn’t as harmless as many people think. According to the CATCH My Breath E-cigarette program, there is much more in a vape than simply flavoring. Specifically, E-cigarettes “are a source of extremely high doses of ultrafine particles in the human respiratory system,” which have been linked to cardiovascular disease. Additionally, “the process of heating the nicotine solution produces aldehyde, acetaldehyde, formaldehyde, and acrolein, which are known carcinogens.”

Unlike cigarettes, vaping won’t get anyone addicted. It’s much different.

One vapor pod containing 200 puffs can have just as much nicotine as a pack of Marlboros or Camels, according to Edutopia. Not only is nicotine addictive, but it’s even more addictive to a teenager’s brain compared to an adult’s brain.

The New York Times detailed one teen’s addiction to vaping in their article The Price of Cool: A Teenager, a Juul, and Nicotine Addiction.

“So began a toxic relationship with an e-cigarette that would, over the next two years, develop into a painful nicotine addiction that drained his savings, left him feeling winded when he played hockey and tennis, put him at snappish odds with friends who always wanted to mooch off his Juul and culminated in a shouting, tearful confrontation with his parents.” –The Price of Cool: A Teenager, a Juul and Nicotine Addiction

MYTH: VAPING IS A GREAT ALTERNATIVE TO CIGARETTES.

Though there are carcinogens in e-cigarettes, According to Dr. Michael Blaha, the director of clinical research at the Johns Hopkins Ciccarone Center for the Prevention of Heart Disease, “There’s almost no doubt that they expose you to fewer toxic chemicals than traditional cigarettes.” However, the FDA has not currently approved vaping as a smoking cessation method. In fact, according to the National Center for Health Research, “a year-long study published in 2018 compared smokers who used e-cigarettes to traditional cigarette smokers, and concluded that e-cigarette users were more likely to say they were trying to quit but no more likely to successfully kick the smoking habit, with 90% of e-cigarette users still smoking regular cigarettes at the end of the study.”

Even more dangerously, many teens are enticed to try vaping who wouldn’t have tried cigarettes. While most of us have been taught since pre-school that cigarettes are dangerous, bubble gum vaping sounds (and smells) much less ominous. The fact that these flavored vapes are often used indoors makes them easier and more convenient for teens to try. According to the CDC, the younger people are when they begin smoking, the more likely it is they will develop the habit. According to Dr. Blaha, ““It’s one thing if you convert from cigarette smoking to vaping. It’s quite another thing to start up nicotine use with vaping. And, it often leads to using traditional tobacco products down the road.”

Simply put, vaping is a trend among teens that can have dire consequences. For parents and educators, the most important thing to do is have an open, honest dialogue about it. While most teens have been exposed to vaping, few actually know the scary facts behind it.

Not sure where to start? This PDF from the CDC and Surgeon General, which goes over tips for starting the conversation, answers to common questions, and further resources to explore. 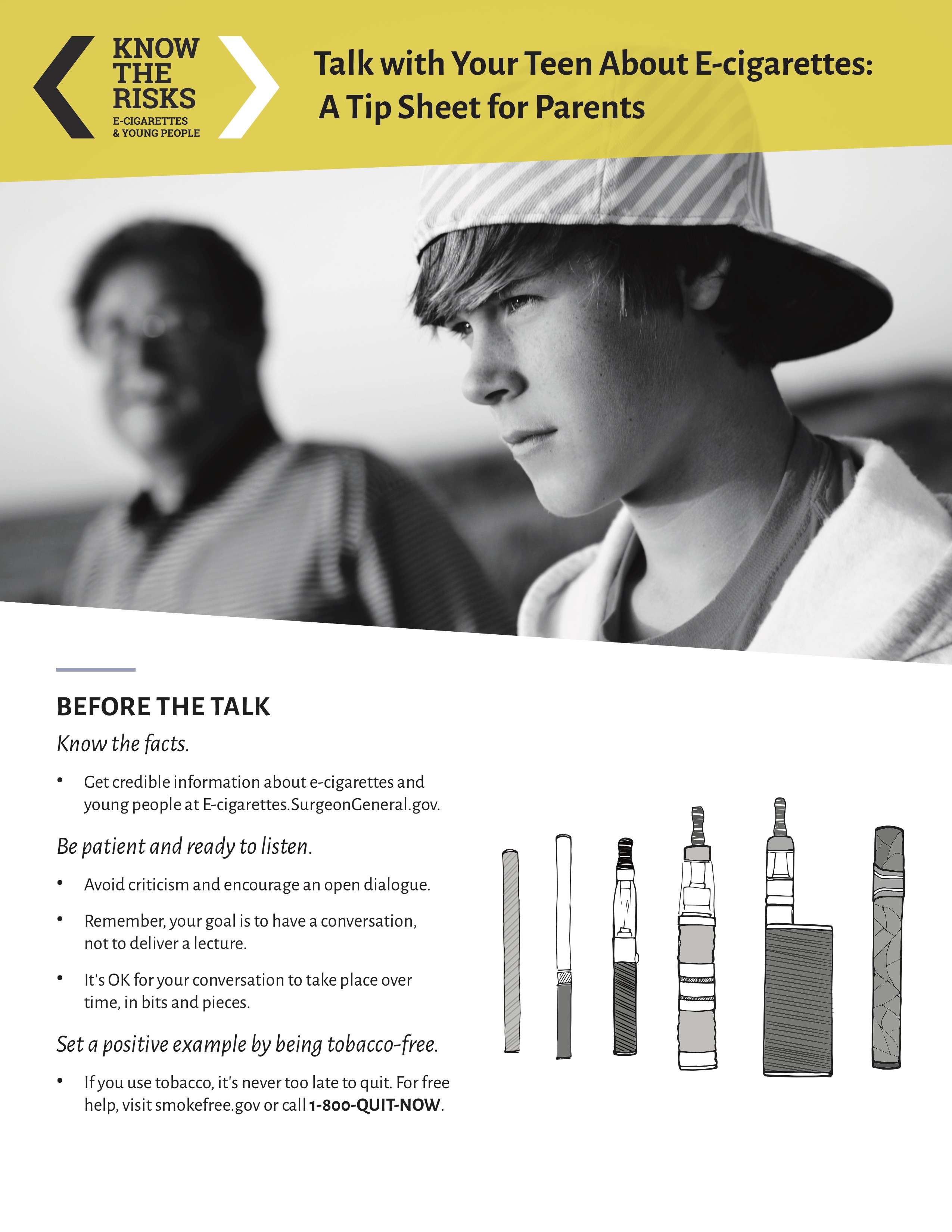 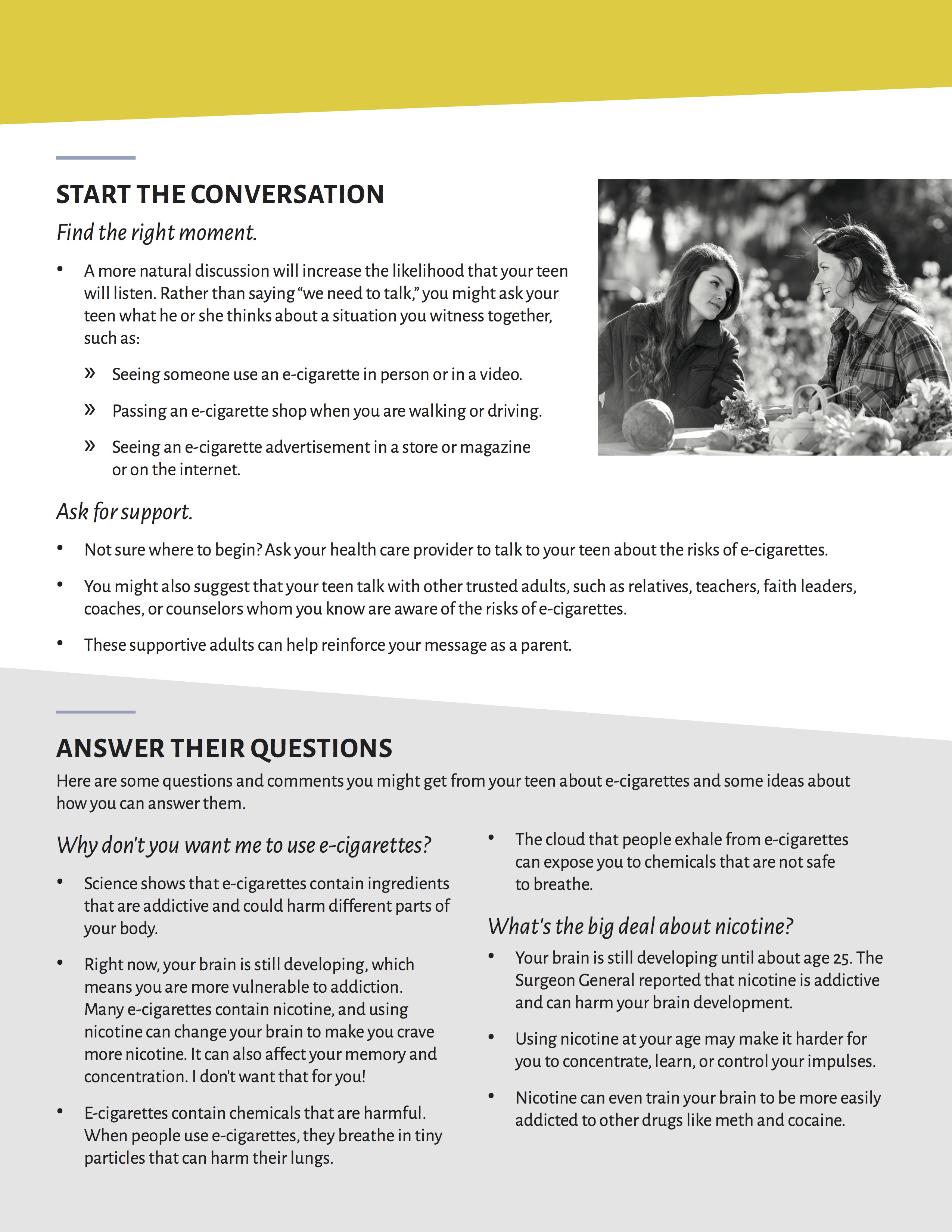 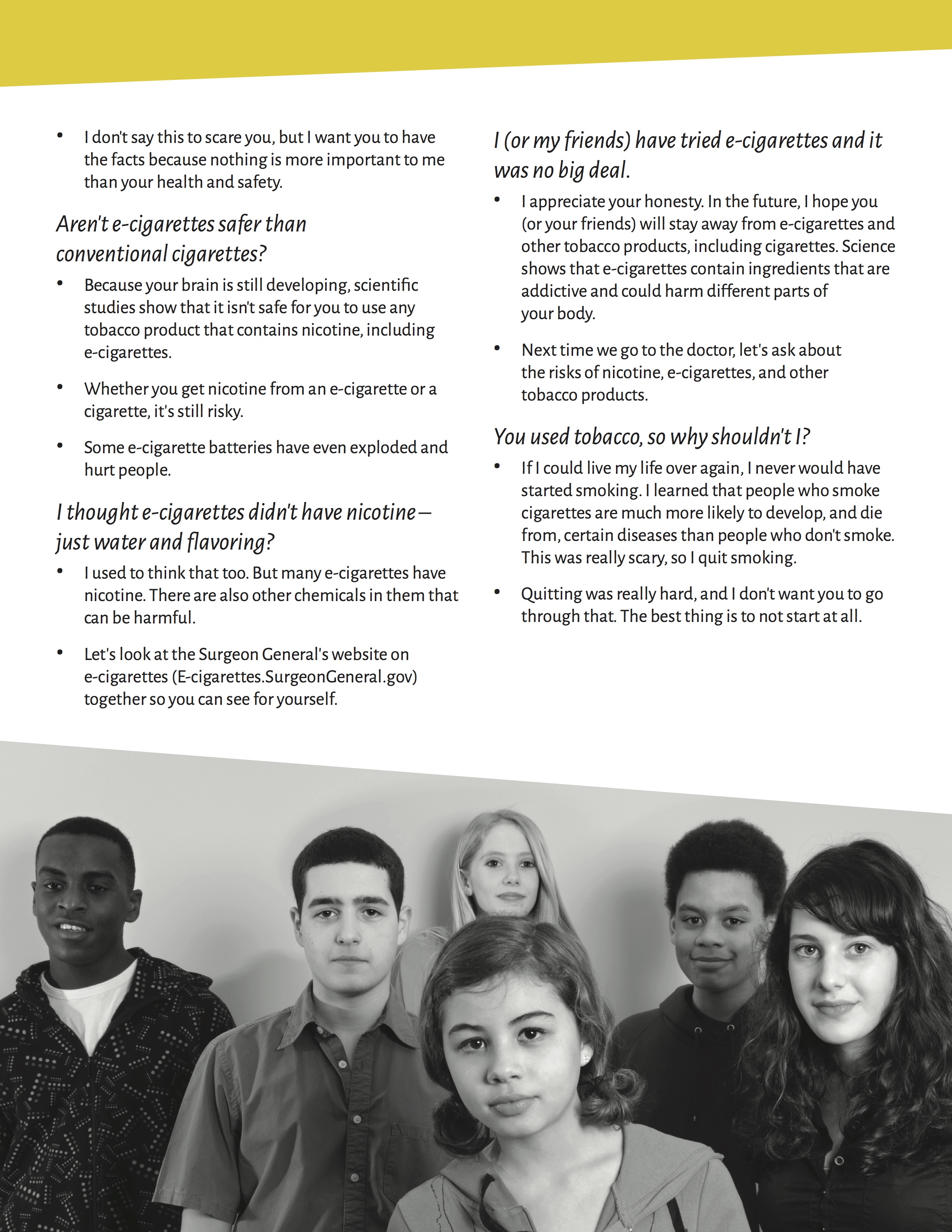 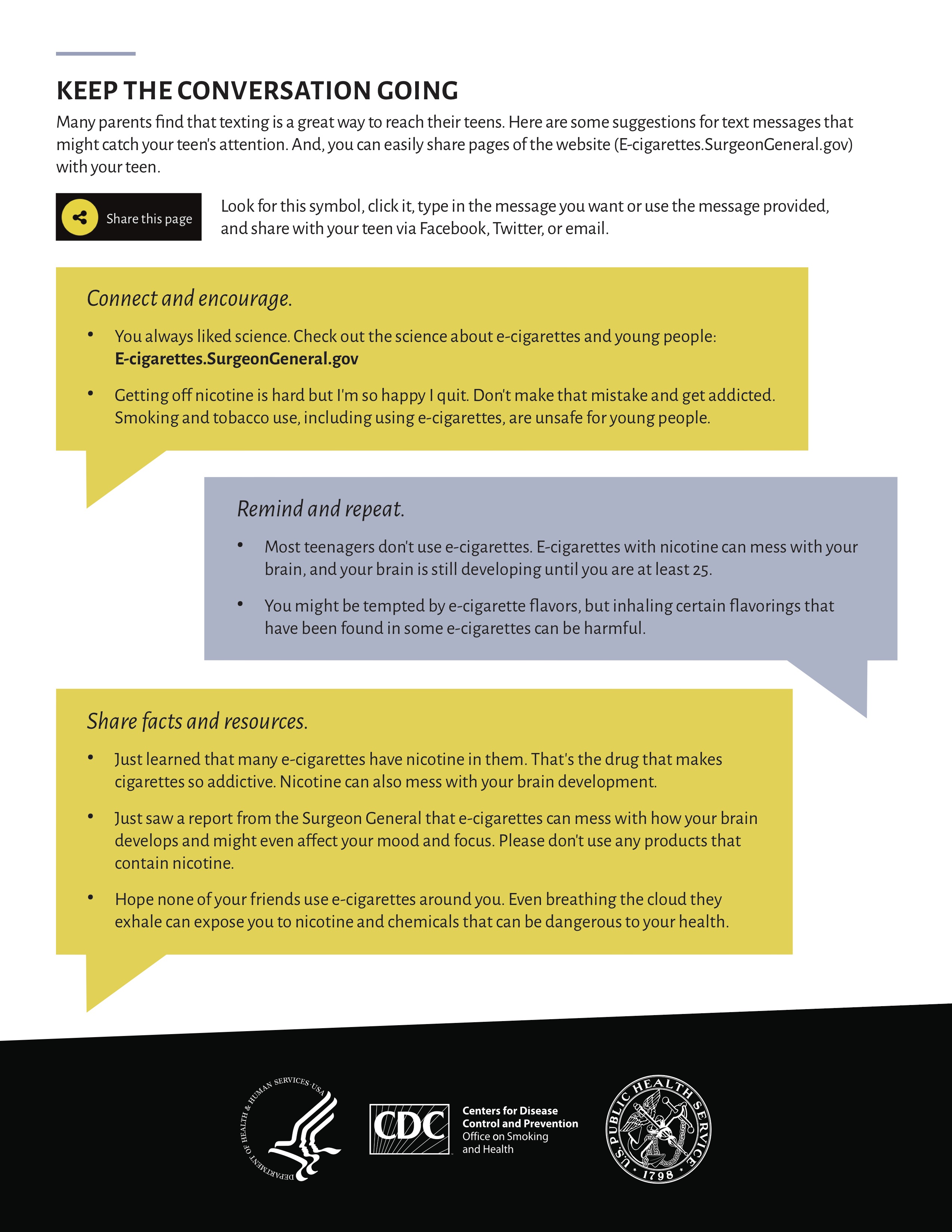