“Harvard, Please Let Me In!”: What We Can Learn From Ethan Kim’s Rap Video Plea 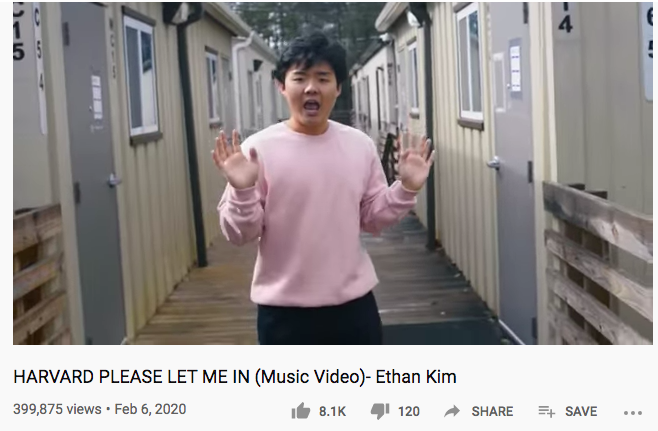 A few years ago, we wrote a post about moving forward from being waitlisted or deferred from your first choice school, and we stressed one point: “If you’re on a college waitlist and you’re desperate for acceptance, the last thing you should do is sit around and wait.” Ethan Kim, a high school senior from Charlotte, NC, has clearly heard the same advice – and he ran with it. After being deferred from Harvard in December, he made a bold move in an attempt to get the school’s attention and convince them he deserves a spot… he made a rap video.

If you have 3 minutes and 39 seconds to spare, I promise you, this video is worth your time. I experienced a mixture of emotions: joy, because this video is clever and funny; respect, because this really is a brilliant move; and optimism, because regardless of Harvard’s ultimate decision, Kim clearly has a bright future ahead of him.

When you think of Harvard, the oldest university in the country, you probably don’t think of a funny rap video. But let me point to three big reasons why I personally think this was an awesome decision on Kim’s part.

He is demonstrating to Harvard that they are his #1 choice.

Actually, he’s demonstrating to the entire world that Harvard is his #1 choice! He’s shooting his shot, even though he knows the odds might not be in his favor. He’s telling everyone, “I didn’t get in. I still might not get in. But this is how badly I want to get in.” You’ve got to respect someone who does something with zero ego. You’ve also got to respect someone who risks putting off other schools. While there are obviously thousands upon thousands of students who cite Harvard as their top choice, Kim is walking the walk.

Your original application should show demonstrate as much interest as Kim’s rap video. And if you’ve been deferred, take a page out of Kim’s book and show that school how badly you still want to attend. Whether that means writing letters, meeting with counselors on campus, or finding your own brilliant way to restate your interest, do it.

He’s being himself, in all of the best ways.

One thing that we always remind our students is that originality is invaluable. Schools aren’t looking for a perfect freshman class, but rather a freshman class full of exceptional and extraordinary individuals. In his lyrics, Kim admits:

See, I’m smart but not the smartest ever
But put me in the class and I’ll be putting in the effort

He’s sharing that there are students with better grades and test scores, while simultaneously showing everyone that he’s got some intangible qualities that will take him far: creativity, fearlessness, individuality, and ambition. He may not have stood out enough on paper, so he’s trying his hand at another medium.

Hopefully, your application already showed the school how authentic and special you are. And if you were still deferred, embrace everything that makes you one-of-a-kind and remind them!

He found a way to stand out.

Everyone who applies to Harvard, or at least the vast majority, has great test scores, an impressive GPA, polished essays, a hefty list of extracurricular activities, and a handful of awards and accolades. Those things are obviously incredibly important, but you’re not going to stand out in an admissions counselor’s memory with them. But a viral rap video? Ethan Kim is officially unforgettable.

Kim’s video embodies so many important aspects of the college admissions process. It’s smart and well executed. It’s wildly original. It highlights the things that makes him different. It’s also a reminder of how competitive this process is. It remains to be seen if Kim’s unconventional approach pays off, but he’s already shown the world that he’s a talented, special person with a whole lot of passion.

In the description box of his YouTube video, Kim added a short disclaimer: “I know that simply making a rap video is not going to get me into one of the best colleges in the world, but this is the best representation of me. Ultimately, wherever I end up is where I belong.”

PrevPreviousClass of 2024 Early Admission Stats: What We Know So Far
Next5 Ways to Improve Your Critical Thinking SkillsNext