Realistic Ways To Talk To Your Teen About Drinking 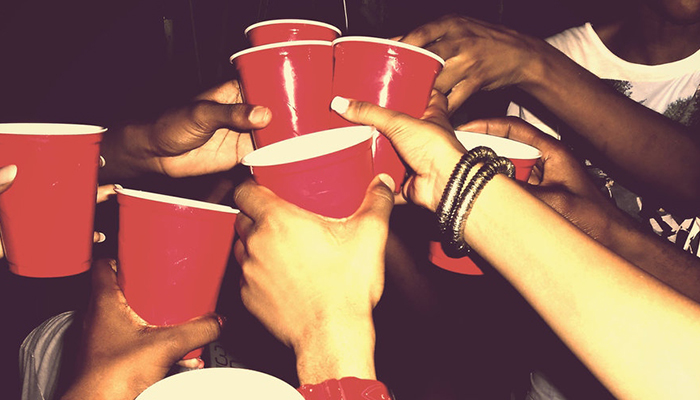 Ask a group of parents what they worry about most when it comes to raising teenagers, and many of them will rank drinking and drug use near the top of their list. Most of us have heard (or even witnessed) horror stories about underage drinking, and naturally want to protect teenagers from making potentially life-altering (or even life-ending) mistakes.

Full disclosure: I haven’t yet raised a teen. I’m currently expecting my first child, and have years until I cross that bridge. However, I can speak from the perspective of a teenager who – to put it simply – engaged in a lot of behaviors that would not have made my mother proud (that is, if she knew about them). I remember the conversations (or lack thereof) that my family had about drinking, and I know exactly what I wish I would’ve heard from my parents. While I can’t promise it’ll squash all your underage drinking fears, this is a pretty good place to start.

Be transparent about your concerns.

My parents told me they worried about drinking and driving or getting arrested, and in health class we learned all about teens who drank themselves to death. My friends and I were all aware of these worst-case scenarios, and therefore never put ourselves in life or death situations.

What I wish someone had talked to me about were the consequences that aren’t life or death. I wish I’d heard how easy it is to ruin a reputation, and how hard it is to clean it back up. I wish I learned that alcohol and sexual assault often go hand in hand. I wish I knew that alcohol can exacerbate anxiety issues, that it can permanently affect the brain, and that drinking as a teen increases the chances of becoming dependent on alcohol later on. I wish an adult I admired told me how genuinely cool it can be to be composed and clear-headed at a party, instead of only telling me how easily I could die or go to jail.

Make your expectations (and consequences) clear.

I knew my parents didn’t approve of underage drinking, but it wasn’t really something we laid out in black and white terms. By the time my senior year rolled around and freedom was in sight, I found myself saying things like, “Eh, I think they’d be mad at me if they knew I was drinking, but I’m not sure if they’d do anything about it.”

As it turns out, they definitely were mad when I ultimately got caught, and they did do something about it. However, it would’ve been nice to have a straightforward conversation prior to that happening. Sit your teen down and tell them, straight up, that you do not condone any underage drinking whatsoever, and what the exact punishment will be if they’re caught.

Obviously, the safest way for a teenager to drink is not at all. Let your rules and expectations be known, and make sure your child knows that you do not approve of them drinking. However, it’s equally important to have conversations about what will happen if things don’t go according to your perfect plan.

For example, let’s say they go to a party and their ride decides to drink. If they believe you have zero tolerance, they likely won’t call you for a safe ride home. What if they drove themselves, got caught up, and decided to drink? If they believe you’ll be furious if their car is not in the garage the next morning, they may hesitate to call an Uber and instead insist on driving home. The list about potential scenarios goes on and on, and it’s important to be realistic and have transparent conversations beyond just, “Do not drink or you will be severely punished.”

Remind them their safety is your #1 priority.

The reason you don’t want your teen to drink is because you fear for their safety. That is the ultimate bottom line. Remind your teen (repeatedly) that there is nothing more important than their health and their life.

Specifically, it’s crucial that your child feels comfortable asking for help. Whether they are stranded somewhere without a sober ride, think a friend may have had too much, or think they might have a problem with alcohol, they need to feel like they are safe coming to you. Do not assume they know this ­– they don’t. Unfortunately, I’ve had close friends wind up in dire situations because they feared their parents’ wrath more than they feared legal or medical consequences.

The most important thing you can do is talk about drinking, and talk about it often. This is not a subject that can be broached one time freshman year and never discussed again. Speak openly and honestly, and give your teen an outlet to do the same.

PrevPreviousHow To Learn In Big College Classes
NextBeing Perfect Is Great, But Being Interesting Is BetterNext